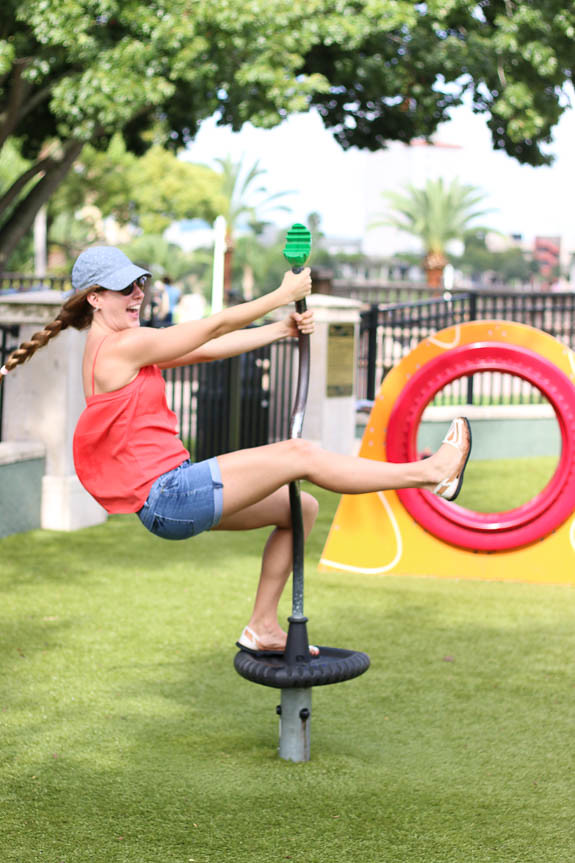 A few weeks ago my sister and I went to visit our newly married friends in St. Pete for the weekend. We left on Friday and stayed until late Sunday, which gave us plenty of time to explore. From the minute we got there our weekend adventure started in high gear. Erin and Nathan (our friends) had the whole weekend planned and wanted to show us all the cool spots around town. On Friday when we arrived at their apartment- it took us a little longer than expected, lots of traffic and monsoon rain- we dropped all of our stuff off, had a tour of their apartment, freshened up and then went to find a yummy place to eat. We were all so hungry! Starving would be an understatement. After dinner they drove us around Downtown St. Pete. We were supposed to go fishing but it rained all night and it was forecasted to rain all day on Saturday too.

On Saturday we woke up super early and headed to Mirror Lake in Lakeland. If you’ve never been to Lake Mirror, I recommend you go, they have the prettiest garden, a cafe to eat at and giant swans. It really is the perfect place for a photo op. Erin and Nathan had previous plans for a 1 year anniversary photoshoot and my sister and I thought it would be fun to tag along. The drive to Lakeland from St. Pete wasn’t to bad and only took about 45 minutes. While our friends were having their picture taken, my sister and I brought the longboards to cruise around the lake but that only lasted a few minutes. BECAUSE, we found the coolest playground ever! So long longboards, we found our new love, which is an awesome playground called Barnett Family Park. It had so many interactive elements to it. This was one of the funnest parts of our trip. Anytime we are able to act like 5 year olds, my sister and I are all over it! The playground itself had this pretty, bright green AstroTurf instead of mulch or sand.

Lake Mirror was super fun, but man it was hot. We were all starving and thirsty after that. After our photoshoot, we headed back towards St. Pete and stopped in downtown Tampa for lunch. There were tons of cute places to eat at but we chose this place called, FRESH. It was really tasty and Erin and I got the most giant salads in super fun shaped salad bowls. After lunch we walked around downtown for a little and then headed back to their apartment to get ready for the beach.

We originally had plans to be outside the whole weekend but the rain got in the way of that. Once we changed into our swimsuits, we headed to John’s Pass. As soon as we drove up, I immediately recognized the place. I had been there before with my family a few years ago when we stayed in Clearwater. We walked up and down all the shops, bought a few touristy items (who can pass up neon tank tops), then headed to the pier and jumped into the Gulf ocean to cool off. It really was sweltering all day but the dip in the ocean felt so good. I was refreshed and ready to tackle our next adventure.

That night we had plans to go spear fishing but it ended up raining the whole night. We got stuck in Tijuana after dinner and the rain never let up. Instead we did what any normal person would do in torrential downpour rain, yep that’s right, we headed straight to Whole Food and Target. I was able to stock up on cereal and chocolate and we kept ourselves entertained at Target, or at least us girls were pretty happy….poor Nathan on the other hand just wanted to fish. The rain never let us, so after that we called it a night and just forgot about trying to fish at night.

Surprisingly on Sunday when we woke up, there was not a cloud in site. It always works like that, huh? It rains your whole trip, and the day you leave, there’s not a raindrop in sight. We weren’t going to leave until later that afternoon, so we made sure to squeeze everything else we wanted to do on that Sunday. First stop was church, then us girls stopped at Goodwill while Erin’s husband loaded all of the fishing gear into their car. We might have taken a teensy bit longer shopping than he did loading the car. What can we say, we girls. After shopping, we all ran home, got our swimsuits on and headed to the St. Pete pier to go fishing. We stopped at Jimmy John’s and got our lunch to go and made it to the pier just in time. It was so beautiful out! We fished, longboarded (we brought the longboards to skate on the pier and it was so fun!), talked, and relaxed. We didn’t have any luck catching anything but we almost caught a baby shark. I was so excited to see one up close! After sweating our socks off on the pier, we stopped at Kilwins for some more food to nourish our bodies and then headed back to their apartment so we could get ready for our drive back to the East Coast. It was such fun trip and the best way to end the summer! Even though technically in Florida, it’s still summer for a few more months!

Recap of My Day at Gaylord Palms, Orlando + What I Wore!